It is late August here on the farm.  The crickets lull us to sleep at night and heavy fog introduces us to most days.  I’ve taken the four kids to JJNewberry’s in Norway and got the usual pencil boxes and school supplies. It won’t be long now before they will be rising early in the morning to trudge down the hill to the bus “stop”.  Earlier I ordered their clothes from Alden’s Catalog, with each one telling me the color he preferred.  Right now, Alan and Gary are off digging in one of the many dump sites on the land ( looking for bottles, I am told), Debbie is in her room reading and Brian is once again trying to do damage control in my little flower bed from the onslaught of cow hooves.

As I’ve said before, cows and I have never been on a friendly basis. I’ll admit to admiring one little Jersey cow that Brian had, as it was quiet and had a pretty face. The others just wander around on gawky legs, chewing the cud and breaking down fences. I have never seen an animal as stubborn as a cow.

I’m not the only one! No siree! Ma is not fond of them at all. I remember her trying to take clothes off the line one day, just trying to help me, minding her own business and out came a cow..right through the fence..toward her. Well, let me tell you, she not only dislikes them, she is afraid of them. Looking quickly about her, she found the only weapon available to ward off the beast. She stood, shrieking, holding a ladder from the back of the boys’ big fire truck. Ma stared the cow down, who was just chewing and standing there, and finally after a couple cracks on the backside from the fire engine ladder, it turned and ambled back across the downed fence. Have you ever noticed that cows just amble?  They have that superior attitude that almost amazes me and infuriates at the same time.

The plum tree didn’t do much this year..maybe a half dozen, but it has been said the old tree is forever old and can’t be expected to gift us with much.  The apple tree in the front yard serves as just that: one points out that we have an apple tree in our front yard. There has never been an apple from those limbs that one could take and declare delicious. I remember a few years ago gathering some and making apple sauce. I think it must have taken a pound of sugar to make it edible.

The potatoes were good this year and after they were dug and dried in the sun, the kids and I filled a spot in the cellar, so we should be fixed for the winter.  We had our fill of cukes and peas. The hail storm earlier in the summer got a lot of tomatoes, but we had enough to satisfy us all. There were so many green tomatoes left that last week I brought a bunch in to make green tomato pickles. One night I dug out the big container and made layers of the pickles, onions, etc. and let it set overnight. The next day the smell was heavenly and the old farm just about raised from its footings. I could eat a dish of them with bread and butter and call it a meal.

Soon the leaves will start changing and as I look down towards Indian Pond, I know there will be a blaze of beauty and slowly the leaves will blow off , leaving us a bleak mountain for a few months.

I like sitting here on the porch and mulling over the summer events..not that much happens here on the hill. Yet, when you’re on a farm, something does happen every day.  My cheese cloth strainer is blowing on the porch line next to me. It is a constant reminder of my 5 a.m. rising and waiting for the husband to bring the morning’s milk. While he is in the barn, I fix his breakfast and when the milk comes in, I switch gears to automatic and strain all the milk and get it in bottles. Raw milk! The kids drink it and I use it for everything but I read so much material that it is bad for drinking etc. Well, the kids seem healthy and the Lord knows I sterilize everything I use. So far, so good. I wonder if we believed everything written if we would dare get out of bed in the morning.

Yesterday, I took the old pick up down in the lower field and raked up hay the husband had cut. One look at the sky and I thought we might have rain. After I raked it, I pitched it on the back of the truck, praying I wouldn’t have a snake slither out. My prayers were answered and I backed the old truck , full of hay, into the garage for the husband to pitch off when he finds the time.

I hate to think of winter coming. It’s hard to heat the old farm with all its drafty corners and windows that have loosened over the years. Someone told me that my Grandfather Libby helped plaster and lathe the walls when the farm was built. That could be. I wish he had put in a lot of insulation at the same time.

The old wood furnace in the cellar must have come over on the Mayflower. It is a huge thing, and I have to be careful not to let the fire blaze too much as the chimney goes straight through the attic. Usually my brothers and friends help cut up the fire wood for the winter and the boys carry it in after school to fill the wood box. After that, the never ending chore of watering the cows awaits them. I fill the pails and they carry along the snowy path I’ve shoveled while they are in school.

But enough thinking of the winter ahead! Today the sky is a bright blue with one cloud resembling Richard Nixon and that seems to drift at a slow pace today. It is about 78 degrees with a light breeze kissing my face every few minutes.

It is stolen moments like this that keeps the spirit going. 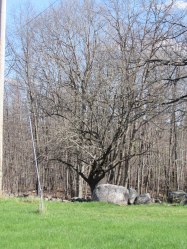